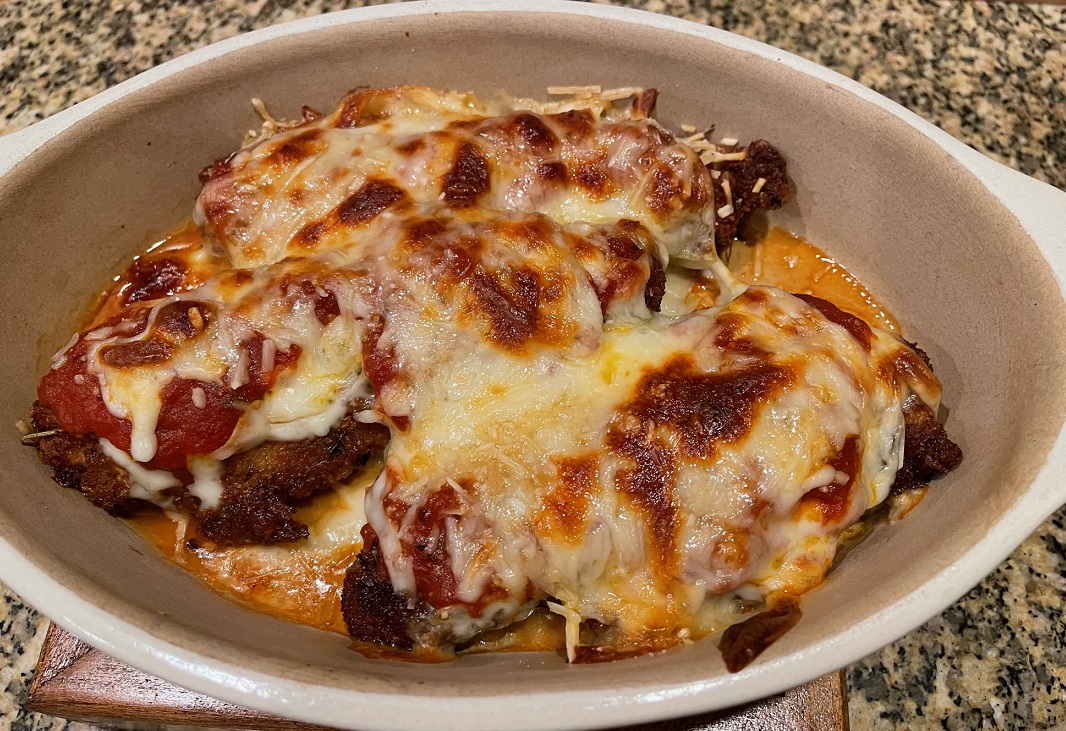 Remember the Parmesan and Herb Chicken Tenders I made recently? Well, I had some leftover and decided to make one of my suggestions, Chicken Parmigiana.

Since I already made the chicken tenders, all I had to do for this dish was put them in the dish with a few dollops of sauce and some grated cheese. Oh my GOSH was it delicious!

I didn’t even fire up my full sized oven. I cooked the entire thing in my toaster oven. Most of my dishes are made for multiple people. This dish was for one person. That said, you could easily up the number of chicken tenders to feed however many people you are cooking for.

I hope the next time you crave chicken Parmigiana, you’ll try my recipe.

Put the pre-cooked chicken tenders in a baking dish

Evenly spread some of the mozzarella cheese on the chicken

Dollop the marinara sauce on each piece of chicken 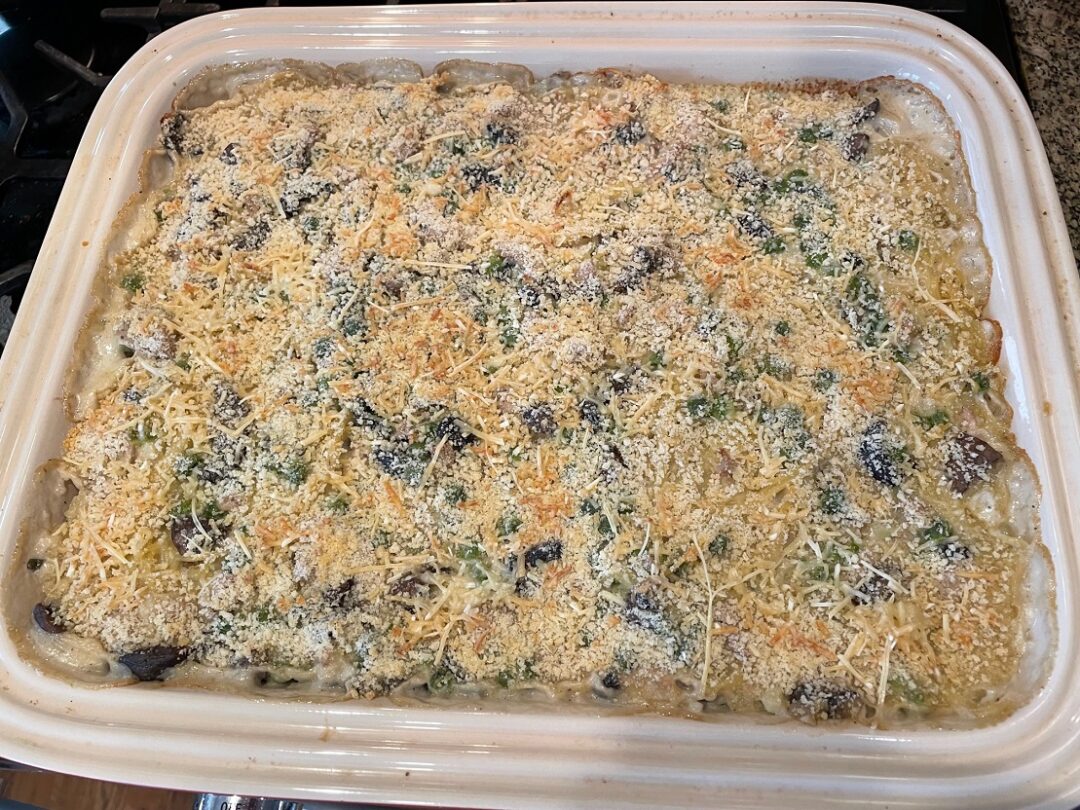 On the menu tonight – Turkey Tetrazzini!

What is Turkey Tetrazzini? You would think with the Italian name, Tetrazzini, it would be Italian. You would be wrong, it is an American dish. While it DOES have pasta and some Parmesan cheese, that’s about as far as it goes in the Italian direction. Tetrazzini is a baked pasta dish browned in the oven with a white cream sauce and usually topped with bread crumbs. It was invented, we think, in San Francisco in the early 1900’s. Others believe it was invented in New York City. You can read all about Tetrazzini here if you want to know more about its origin.

I decided to make it because I was trying to figure out a dish I could make that would help me use up some ground turkey. Usually, you would used a diced chicken or turkey, but I didn’t have that on hand. After a lot of looking around at turkey recipes, I decided to do a Tetrazzini.

I opted to make my own sauce instead of using the canned soup, which I think makes it much more flavorful. Since it includes pasta, a little meat goes a long way. This turned out SO great! It’s so creamy and delicious!

So, if you are feeding a crowd or making a pot luck dish, I hope you will try my version of Turkey Tetrazzini. 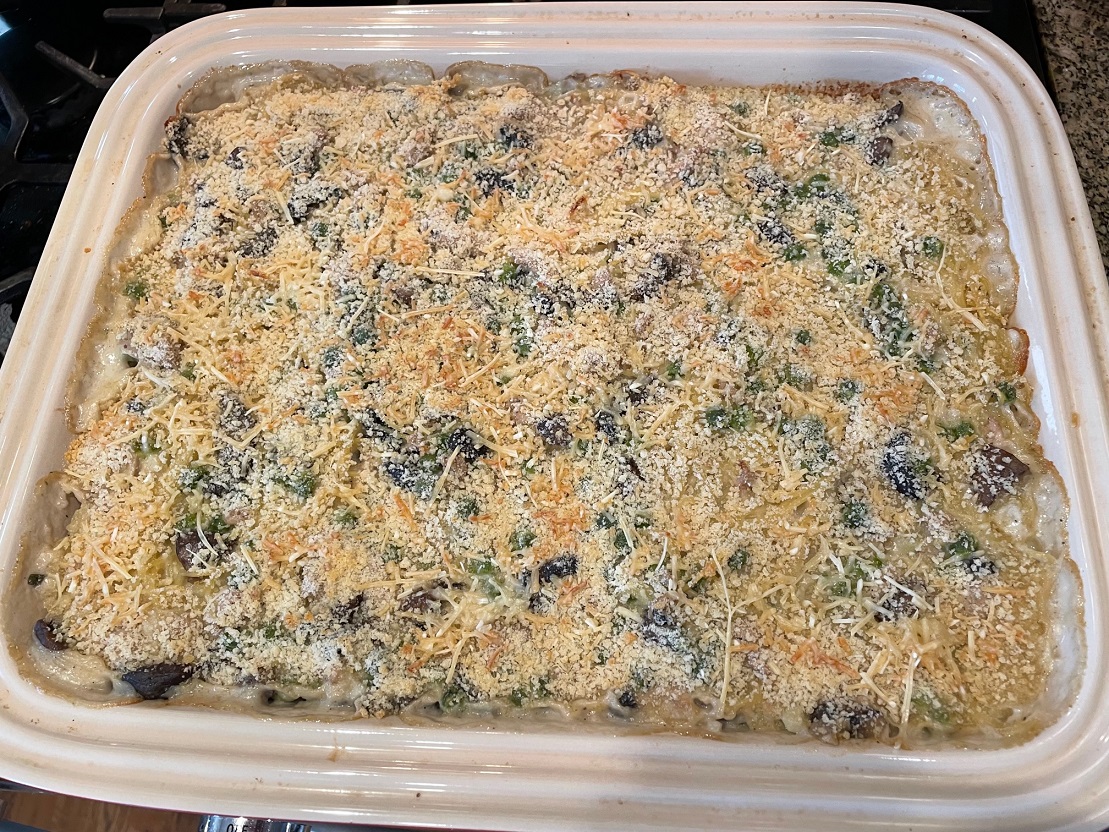 Bring a pot of water to a boil

Once cooked, drain and set aside (save a cup of the water)

In another large pot, pre-heat it over medium-high heat

Add the butter and garlic and let cook about a minute

Add the mushrooms and ground turkey

Season with salt and pepper

Once the turkey is mostly cooked, add the white wine

Cook until the liquid has reduced by half

Sprinkle in the flour and stir. The sauce will start to thicken quickly

Add the broth, stir, and continue to cook until the sauce is nice and thick

Add the cream cheese and continue to stir

Add the peas, Monterey Jack and half of the Parmesan cheeses, continue to stir

Add the salt, pepper, and thyme. Taste and adjust seasoning as needed

Add the cooked spaghetti and stir to combine. If the mixture is too thick, add a little more broth or some of the pasta water

Top with panko and the rest of the Parmesan cheese

Bake for 25-35 minutes, until the top is golden brown

Once finished, let it rest at least 5 minutes before serving

You can make several variations on this dish. You could use chicken, tuna, shrimp, and I bet scallops would be really good in this too. If you didn't want any meat or fish, you could use larger pieces of mushroom - like from a Portobello mushroom in addition the cremini. 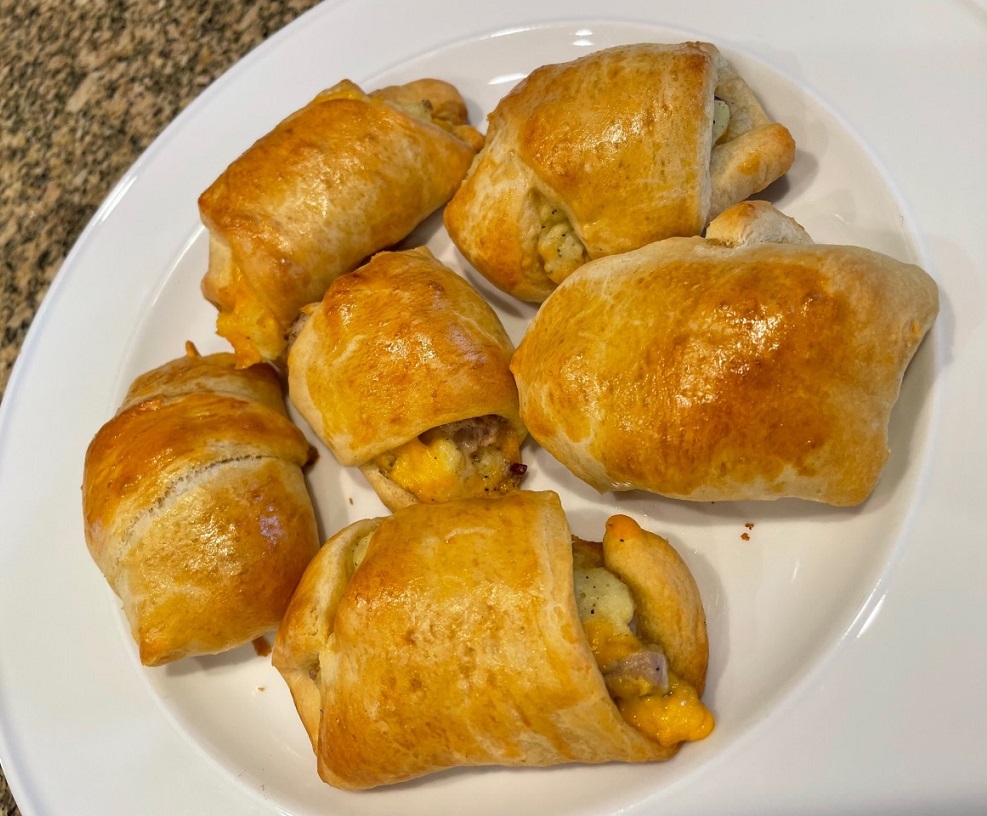 While I was making the Turkey Crescent Wreath, I had some leftover crescent rolls as well as filling, but not enough to make another wreath. So, I decided to make individual rolls. Wow! I kind of like these more than the wreath… Can I say that?

They are the PERFECT size for snacking but they still have all the flavors of Thanksgiving. They are SO good!

The next time you need to make an appetizer, I hope you will my Thanksgiving Rolls!

Carefully unroll the crescent rolls and arrange them on a baking sheet. Stretch them out a little bit if it doesn't look like they will hold enough filling

In a large bowl, add the turkey, cheese, Craisins, mayonnaise, sage, thyme, salt and pepper, then mix to combine.

Taste the mixture and adjust seasoning

Be careful not to overfill, you need to leave enough room to be able to fold the "points" over the mixture

Continue until you have used up the rolls

When finished, let them rest at least 10 minutes before serving

Heat up the gravy while the rolls are resting

While perfectly delicious on their own, even better with some warm gravy to dip them in. YUM! 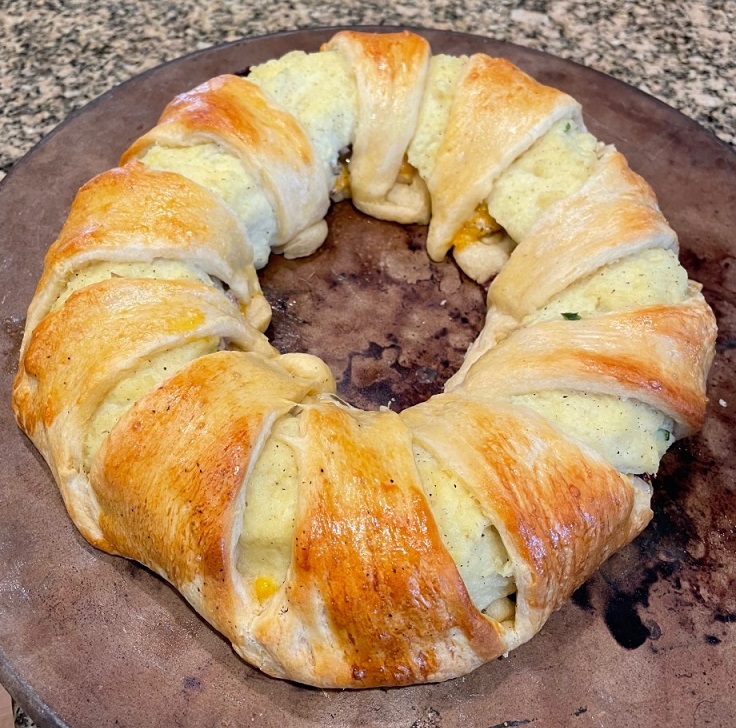 Thanksgiving has passed and now you have a refrigerator full of leftovers. You can only make so many turkey sandwiches before you are ready for something different. This recipe uses just about all the leftovers for one meal.

I used turkey, mashed potatoes, cheddar cheese, and craisins in my recipe, but feel free to add other things like green bean casserole, or any other leftovers. The only thing you may need to buy are the crescent rolls you find in the refrigerated section at the grocery store.

You already did most of the cooking. All you need to do to make this dish is chop the turkey into small pieces and combine it with a few other ingredients in bowl. Then assemble the crescent wreath and bake. 30 minutes later, you have a fresh new meal for the family.

I hope the next time you are looking for an idea to use up Thanksgiving leftovers, you will try my Thanksgiving Crescent Wreath!

Carefully unroll the crescent rolls and arrange them on a baking sheet in a circle with the "fat" side of the triangle in the center and the points facing outward. You can use a bowl in the center as a guide

In a large bowl, add the turkey, cheese, craisins, mayonnaise, sage, thyme, salt and pepper, then mix to combine.

Taste the mixture and adjust seasoning

Be careful not to overfill the wreath, you need to leave enough room to be able to fold the "points" over the mixture

Continue around the wreath until it is fully formed

When finished, let it rest at least 10 minutes before serving

Heat up the gravy while the wreath is resting

The method I used to form the wreath was using individual dough triangles formed into a circle and folding the points over. The dough comes out of the can in rectangles that you pull apart. You could also simply arrange the rectangles into a circle, fold the ends over the filling, and then carefully separate the pieces once the wreath is filled. Using that method, you could put a little more filling in. So, depending how many leftovers you have, you can choose which method you want to arrange the dough. 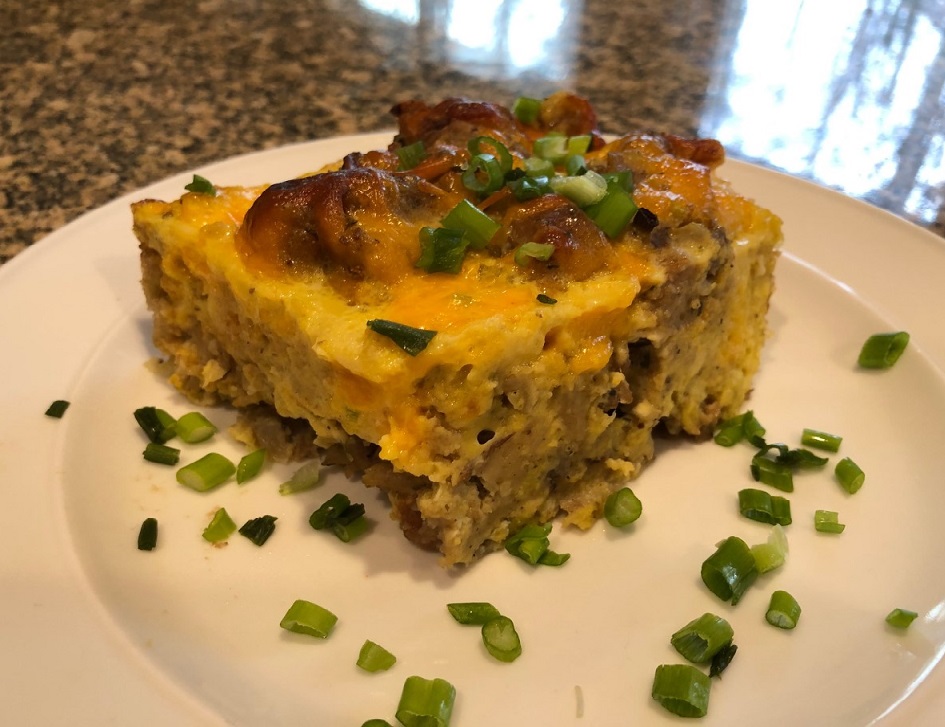 I wasn’t sure what else to do with my leftover Thanksgiving stuffing. Don’t get me wrong, I can eat leftover stuffing for a while and not get tired of it. But each year, I seem to make a few metric tons of stuffing and eventually you have to do something creative with the leftovers.

This is a great recipe to make either for a crowd and/or for some pre-made meals for the week ahead when you don’t have time to make breakfast before leaving for work. The best part about this recipe is you have already done most of the work!

The only ingredients are your leftover stuffing, eggs, a little milk (optional), cheese, and some chopped green onions. Of course, you can always add whatever else you may want. So, the next time you need to feed a crowd for breakfast, consider this breakfast casserole!

Pre-heat the oven to 375 degrees

Break up the stuffing into a baking dish

Pour the eggs into the baking dish

Sprinkle the chopped green onions and cheese over the stuffing

Bake until the eggs are cooked through, about 25 -30 minutes, depending on how much leftover stuffing you had and how deep your dish is